You are here: Home / The Economy / Home Affordability Set To Worsen On Thursday’s Retail Sales Data 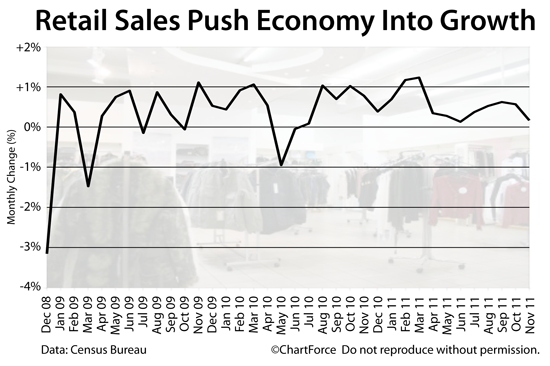 Consumer spending continues to rise nationwide, fueled by jobs growth and a rosier outlook for the U.S. economy. Unfortunately for mortgage rate shoppers |*STATE in % STATE**|, it may also lead to higher mortgage rates later this week.

Thursday morning, the Census Bureau will release its U.S. Retail Sales data for December. The report is expected to show an 18th consecutive monthly increase, with analysts projecting sales volume higher by 0.4 percent from November.

This would be double the increase from last month, which saw a 0.2 percent increase in Retail Sales.

The Retail Sales report tallies receipts collected by retail and food-service stores nationwide. When the sum of these receipts rise, it puts pressure on mortgage rates to do the same. The connection is straight-forward.

As the economy goes, so go mortgage rates.

Remember: today’s ultra-low mortgage rates have been partially fueled by weak economies — both domestic and abroad — going back 4 years. Stock markets have sold off as economies have faltered worldwide, leading investors to seek refuge in the relative safety of U.S.-backed mortgage bond market. The new-found demand for mortgage-backed bonds has helped drop mortgage rates to levels never seen in history.

Last week’s strong jobs report sparked hope for the U.S. economy. If Thursday Retail Sales data reveals similar strength, the risk in “floating” your mortgage rate may be too great. The safer play is to lock your rate today.

The Retail Sales report will be released at 8:30 AM ET.