You are here: Home / The Economy / Home Affordability Threatened By Friday’s Jobs Report 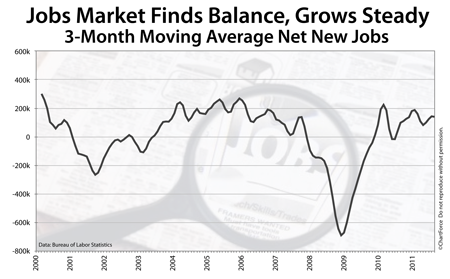 This week, once more, we find mortgage rates are on a downward trajectory. Conforming mortgage rates have returned to near all-time lows. After Friday morning’s Non-Farm Payrolls report, however, those low rates may come to an end.

It’s a risky time for Oklahoma home buyers and would-be refinancers to be without a locked rate.

Each month, on the first Friday, the Bureau of Labor Statistics releases its Non-Farm Payrolls report for the month prior. More commonly called the “jobs report”, Non-Farm Payrolls provides a sector-by-sector employment breakdown, and the nation’s Unemployment Rate.

For January 2012, economists project 135,000 net new jobs with no change in the Unemployment Rate and, depending on how accurate those predictions are proved, FHA and conforming mortgage rates are subject to change. The monthly jobs reports tends to have an out-sized influence on the direction of daily mortgage rates.

The connection between jobs and mortgage rates is fairly direct.

In short, in a recovering economy, when job growth is strong, all things equal, mortgage rates rise. Home affordability suffers.

So, for today’s rate shoppers, Friday’s job report represents a risk. The economy has added jobs over 15 straight months, a streak that’s added 2.1 million people to the workforce. Although the jobs market remains weak and well off its peaks from last decade, a 15-month streak is worth watching. More jobs means more more income earned nationwide, more money spent by households, and more taxes collected by governments.

This items build a foundation for economic growth and Wall Street is watching.

The Non-Farm Payrolls report is released at 8:30 AM ET.