You are here: Home / Statistics / America’s To 10 Safest Cities, Ranked 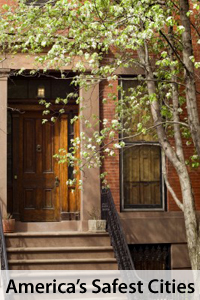 Looking for safe cities in which to live? A recent study may help you.

Titled “America’s Safest Cities“, Forbes Magazine compiled data from more than 70 cities with populations of 250,000 or more, and ranked them by violent crime rate as reported by the Federal Bureau of Investigation.

A “violent crime” is one that can be categorized as murder, robbery, and assault, among others. Then, for each metropolis, local traffic-fatality rates were added to the area’s violent crime rate, and averaged into the data.

Forbes presents the 10 safest large cities in America as :

Forbes is quick to note that “gridlocked” traffic patterns help keep cities safe; which may explain why cities like Honolulu and New York City made the Top 10. When cars are forced to move more slowly, the report states, traffic-related fatalities tend to plummet.

Don’t rush to make a home-buying decision based on Forbes data alone, however. Like everything else in real estate, data is local and city-wide statistics are too broad to be helpful to an everyday buyer in Edmond.

For accurate, real-time, local crime data, be sure to ask a real estate profession.