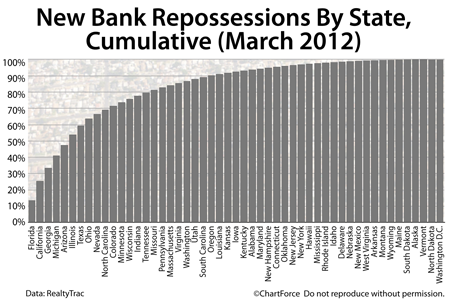 The generic term “foreclosure filing” is used to group all types of foreclosure activity into a single reading. It includes default notices, scheduled auctions, and bank repossessions.

As in most months, foreclosure density varied by region. 6 states accounted for more than half of the nation’s repossessed homes in March.

At the other end of the spectrum, North Dakota and Washington, D.C. were home to the fewest bank repossessions, with 0.03% and 0.02% of the national total, respectively.

Also noteworthy is that the RealtyTrac report revealed that Nevada relinquished its title as Top Foreclosure State after 62 consecutive top-ranking months. In March, 1 in every 301 Nevada homes received some form of a foreclosure filing. The March rate was a nation-topping 1 in 300 in neighboring Arizona.

Homes purchased while in the various stages of foreclosure can often be bought at lower prices relative to homes not in foreclosure. It’s one of the reasons why foreclosed homes now account for 20 percent of all home resales.

Foreclosed homes are often sold “as-is” and may be in various stages of disrepair. Fixing a foreclosed home to make it habitable could wipe out the money saved on its price tag. Your best real estate “deal”, therefore, may be a non-distressed home in sound, move-in ready condition.

If you’re buying foreclosures — or even considering it — be sure to talk with a real estate agent first. The process of buying a foreclosed property is different from buying a “regular” home. You’ll want somebody experienced on your team.