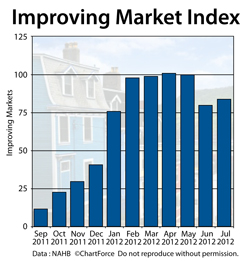 That’s why it’s good news for homeowners that 84 U.S. metropolitan areas are showing “measurable and sustained growth” this month, according to the National Association of Homebuilders’ Improving Market Index.

The Improving Market Index is a derivative report, based on the results of three separate data series which examine a city’s local economy.

The data series used in the IMI are :

The NAHB compiles this data monthly, assigning a given metropolitan area the label “improving” if the following two conditions are met. First, all three data series above must show growth or expansion in the current month.

Second, at least six months must have passed since any of the above that area’s most recent economic “bottom”.

Because of this second clause, the IMI is focused on long-term trends in city growth, singling out only those markets in which sustained economic growth is occurring. The six-month requirement causes “blips” of growth remain ignored, and uncounted.

The July IMI showed 84 improving markets nationwide, a 4-city increase over June 2012. 11 new cities were added to the index including Jackson, Michigan; Springfield, Massachusetts; and, Houston, Texas. Seven cities fell off the list.

32 states are represented in this month’s IMI, and the District of Columbia, too.

For Oklahoma home buyers, there isn’t much actionable information in the Improving Market Index. We don’t see how many homes were sold in the month prior, for example. Nor do we see how quickly homes are selling in a particular ZIP code. But what the IMI can provide is a broad look at whether a local economy has found its footing.

When economies are strong, it can create competition for homes which can drive up home sales prices.

The complete Improving Markets Index is available for download at the NAHB website. But, for a better feel of what’s happening in Edmond on a local level, talk to a real estate agent.