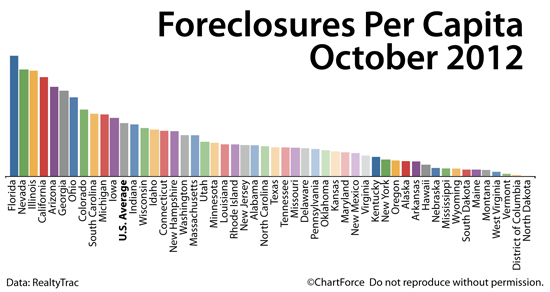 According to data from RealtyTrac, a national foreclosure-tracking firm, the number of foreclosure filings increased 3 percent in October as compared to September 2012, climbing to 186,455 U.S. properties.

RealtyTrac defines a “foreclosure filing” as any foreclosure-related action including a Notice of Default, a Scheduled Auction, or a Bank Repossession. On average, 1 in every 706 U.S. homes had a foreclosure filing during the month of October.

For the 24th consecutive month, the number of bank repossessions fell, down less than 1% from the previous month and down 21% from October 2011. Bank repossessions dropped in 37 states, plus the District of Columbia, indicating that banks are seeking alternatives to foreclosure.

Distressed home sales, which include foreclosures and short sales, represented 23% of sales in the second quarter of 2012, down from 30% a year ago, according to the National Association of REALTORS®.

One in every 312 Florida housing units had some sort of foreclosure filing in October as foreclosure starts moved to a 12-month high. Monthly filings increased 2% from last month.

In Nevada, the monthly increase was larger, rising 41% month-over-month, lifting it from the fifth-highest rate in September 2012, to the second-highest in October 2012.

Third-ranked Illinois saw a 6% increase in foreclosure filings over September 2012. California and Arizona rounded out the top five.

Hurricane Sandy made an impact on the foreclosure market, too, with a foreclosure moratorium being put into effect in the states most affected such as New Jersey, New York, and Connecticut.

For Edmond home buyers planning to venture into the home foreclosure market, there are well-priced homes for sale. However, understand that a foreclosure property is often sold “as is,” and that you may not be allowed into the property prior to the sale to inspect for damage. Home may have termites, been gutted by previous tenants or owners, or be filled with lead paint or asbestos.

For this reason, it’s a good idea to engage an experienced real estate professional when buying foreclosure properties. Real estate agents can guide you through the foreclosure process and give advice regarding contracts and home inspections.