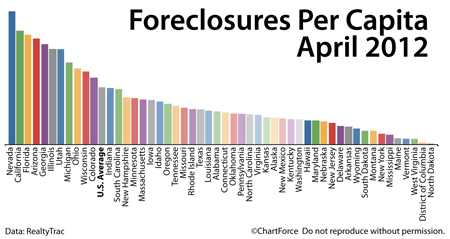 Foreclosures filings fell 5 percent between March and April of this year, and by 11 percent as compared to one year ago. The data comes from RealtyTrac. The foreclosure-tracking firm tallied fewer than 189,000 foreclosure-related actions last month — the fewest number since July 2007.

Rapidly-declining foreclosure figures are another signal that the U.S. housing market may already be in recovery.

According to RealtyTrac’s methodology, a “foreclosure filing” is any one of the following foreclosure-related events : (1) A default notice on a home; (2) A scheduled auction for a home; or, (3) A bank repossession of a home.

All three showed improvement in April :

Furthermore, April’s bank repossessions figure is notable. With just 51,415 homes reclaimed by banks, last month’s total represents a 26 percent drop from April 2011, and is the 18th consecutive month during which bank repossessions fell. This figure suggests that banks are seeking alternatives to foreclosure, including loan modifications and short sales, when appropriate.

Indeed, the National Association of REALTORS® reports that 11 percent of April’s home resales were short sales.

Whether you’re a first-time home buyer or an experienced one, homes in various stages of foreclosure can be alluring. They’re readily available and often come cheap as compared to non-distressed properties. However, make sure to look beyond just the “list price”. Foreclosed homes are often sold as-is. This means that the property could be run-down or rife with defects that render it uninhabitable and/or un-lendable.

If you plan to buy a foreclosed property in Edmond , therefore, engage an experienced real estate professional. You can learn a lot about how foreclosures work by doing research on the internet, but when it comes to writing contracts and checking homes for defects, you’ll want an experienced agent on your side.